Current events are making clearer the fact that new technologies, such as the spread of the internet, social media and new mobile software applications are impacting in developing fast and lasting social changes.
Recent riots in the UK have certainly been a clear example of the effectiveness and rapidity of these tools in engaging communities around certain topics and values. Considering UK riots it is worthy to note how specific patterns characterising the Arab spring are developing in a similar way, yet with different causes and social settings.
The so-called Arab Spring not only has challenged years of dictatorship, but also enabled people to realise how powerful the use of new technologies and media is in creating shared values able to support revolutions. As a matter of fact, the socio-political unrest that took place in countries such as Tunisia and Egypt first; Libya, Syria and Yemen then, have been shaped by new technologies, yet in different ways.

With this paper not only we aim to look at the different ways new technologies have impacted on the development of revolts in the MENA region, but also the extent to which mobile phones have been used to tackle governments’ restrictions.

Considering unsuccessful revolutions also contributes in demonstrating that, although mobile phones and new technologies cannot determine the outcome of a revolution, yet they can make it happen. As a matter of fact, although both Syrian and Libyan governments represent oppressive regimes, characterised by a cruel military force, which hardly leaves any hope for a socio-political change, yet Mr Radwan Ziadeh, executive director of the Syrian Center for Political and Strategic Studies in Washington DC affirmed that it is the first time that Syria assists to this kind of popular uprising.

Many protesters have confirmed that what gave power and voice to their resistance is digital technology (Somaskanda, 2011, Spreading the Word: Syria’s digital revolution). Images of popular uprising in Tunisia and Egypt and broadcast news mentioned above, reached the Syrian and Libyan citizens, transmitting them that spirit of protest. One Syrian protester stated:
“This couldn’t have happened earlier […] now we have cell phones and can talk to each other, and we know what is happening in other towns.”
It is therefore obvious to note that the increasing penetration of simple mobile headset in the Arab society has made drastic changes in considering and developing opportunities for social action. The immediate communication among individuals belonging to a given community and sharing a certain set of values provides them with a strong feeling of companionship. Mobile phones and social media give the opportunity to concretely acknowledge the amount of people engaging in the same battle and increase citizens’ involvement.
The part played by mobile phones in Libya is to a greater extent astonishing. As a matter of fact, unlike the Tunisian and Egyptian governments, when Ghaddafi shut the whole communication network and internet he did not step back and based the hub of the communication infrastructure in Tripoli, to give the regime full control over any kind of internal communication. Given the impossibility of interacting, rebels have been forced to develop a plan to hack a new hub to create a new and independent network. Thanks to the financial help from the U.A.E. and Qatar, a group of Libyan engineers managed to successfully integrate their new equipment to the existing hub in Tripoli and restore communication. The satellite network provided by the U.A.E. telecom Etisalat, enabled rebels to have their own mobile phone network, which gave them the opportunity to organise subsequent actions (The Wall Street Journal, 13/04/2011).
Moreover, the easiness of communication given by mobile phones and social media not only has enabled citizens and rebels in countries like Syria, Libya or Yemen to follow the North African events, but also led governments to follow the same path and approach the equivalent method.
As the Tunisian blogger Sami Ben Gharbia acknowledged, “Governments are using social media to their benefit” since many groups supporting the Algerian President Bouteflika or the Egyptian President Mubarak’s son have been created during presidential elections or in rioting times (Ghannam 2011). Furthermore, in Libya text messages stating “We congratulate those who understand that interfering with national unity threatens the future of generations” have been sent from the Ghaddafi regime to millions of mobile phone subscribers (The Telegraph, 20/02/2011), while Egypt is known to have forced the telecom company Vodafone to send pro-governmental SMS.
Conclusions

Positively or negatively, supporting or opposing revolutionary actions, mobile phones and new technology have played an impressive role in reaching and influencing people globally. Although talking about immediate social change might be too optimistic and quite unrealistic, it should be admitted that mobile telephony and the spread of the use of social media in socio-political related issues is providing the basis for gradual and long term social transformations. Already people feel increasingly comfortable in taking action because of the power embedded in these tools. Distances have been shortened and times have been restrained. While in the past organising a revolution was requiring years of personal and secret meeting on a small scale, today events like those we have witnessed can be organised in few days, thanks to the inputs and contribution that every single and each person can easily introduce every minute.

TUNIS – Over 1000 women took to the streets of Tunis last Saturday in order to ensure that the gender-equality rights that they have enjoyed for so long are maintained. Tunisia will hold its first election since the ousting of President Zine El Abidine Ben Ali on October 23rd of this year, however, with women in Lebanon and Egypt being pushed out of new constitutions, it is only natural that those in Tunisia are fearful of being sidelined under the new government.
The protest marked the 55th anniversary of The Personal Status Code (CPS), a significant equal rights bill that was passed under the leadership of Tunisia’s first president Habib Bourguiba. The bill – that enforced equal pay for women, provided them with equal rights in courts of law and banned polygamy – was seen as groundbreaking during its implementation in 1956. However, if Tunisia suffers from a rise in post-revolution religious conservatism, women in the country may see restrictions imposed on these rights. Emna Ben Jemaa, a Tunisian lecturer and journalist explained that “for Tunisian women, independence is not something that came with the revolution, it has been there for a long time” but gender equality in the country is “facing the threat of a loss in the gains made over the past decades,” said to Ahlem Belhaj  head of the Tunisian association of Democratic Women.
Political Islamist group, Ennahda, who were unable to exist under the rule of Ben Ali, have gained a significant amount support in recent months. However, representatives from the group have explained that women have nothing to fear, they “along with men, were victims of injustice under the Ben Ali regime, and it is time for them participate in governing the country,”  explained Noureddine Bhiri, a senior official of the party.
Human Rights Watch issued a questionnaire on Tuesday to all those parties and individuals who will be running in the October elections. The questionnaire, that aims to find out where these parties stand in regards to human rights,  urges all those taking part to “guarantee gender equality as a matter of law, eliminate criminal penalties for nonviolent speech, strengthen judicial independence, and revise the anti-terrorism law to ensure it does not criminalize speech offenses or trample the right to a fair trial.”
“The stakes for human rights are enormous in the election of an assembly that will draft a new constitution and probably adopt critical laws,” said Sarah Leah Whitson, Middle East and North Africa director at Human Rights Watch.  This questionnaire will prove vital in providing women with the most accurate information about where the electoral candidates stand with regards to gender equality, and will therefore allow them to make an informed and empowered decision in the upcoming elections.
Jul,2011
0

Words of Women from the Egyptian Revolution

At SCEME, we only like real men who don’t buy girls!

Demi Moore and Ashton Kutcher through their DNA Foundation (www.dna-foundation.org) have  recently launched a fun and interactive campaign to fight against sex slavery in the US. The campaign named ‘Real Men Don’t Buy Girls’ calls for men to take a stand against sexual exploitation of women and young girls. So far, major celebrities such as Sean Penn and Jason Mraz have participated to hilarious video clips to support the cause.
At SCEME, we decided to join the Real Men cause because it strongly echoes with the work we are doing in the Middle East through our ‘Karamatuna- Dignity’ campaign which investigates and fights against women trafficking in the Middle East- an issue which otherwise receives little exposure in these countries.
While we do not have movie stars supporting our cause yet (but we are working hard on that and if you are a friend of a friend of a movie star please spread the word!), we are very proud to get the support from our wonderful team of volunteers and friends which are our own superstars! Check the pics below and Join our campaign at http://sce-me.org/get-involved/take-action 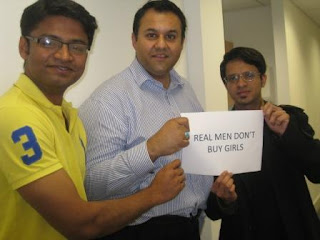 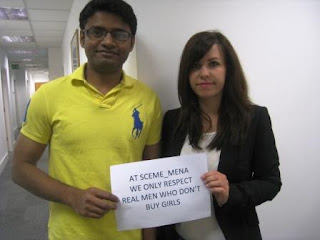 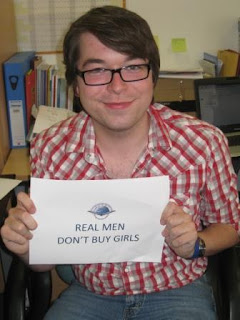 Egypt: women call for equal participation and full involvement in the democratic transition

Egyptian women largely and equally participated in the revolution with Egyptian men , side by side, and some of them have been imprisoned and some missing while others have sacrificed their lives, and we believe they have the right to participate in building the New Egyptian State on the simple basis of citizenship.
The current political situation is as follows for women: The Supreme Council of Egypt’s armed forces (which ensure the transition) has suspended the Constitution, dissolved the Parliament, and formed a committee to draft a new Constitution for the country. Amendments will be submitted to a popular referendum.  In this perspective, specific guarantees covering women’s rights need to be written into Egypt’s new Constitution to ensure a significant women’s Parliamentary presence but also to protect them against sexual harassment and to enforce their rights.
However, no women have been appointed to participate in the constitutional committee in charge of the revision of the Constitution and the proposed amendments so far still limit their participation.
Yet there is no guarantee at this stage that women’s rights will be enforced in the New Constitution. At SCEME, we support Egyptian women in their battle for recognition and please join us in raising awareness on this issue as soon it will be too late.
Mar,2011
0

As the world is celebrating the 100th International Women’s Day, in the Middle East, thousands of women are victims of trafficking everyday. Sadly, their situation remains unknown or ignored by the majority.
So please, take a look at the facts, and help us BREAK THE SILENCE TODAY and BRING THEIR DIGNITY BACK.
DID YOU KNOW THAT?
TAKE ACTION TODAY ON WOMEN’S INTERNATIONAL DAY AND SIGN UP TO STOP WOMEN TRAFFICKING!
http://www.sce-me.org/get-involved/take-action
Mar,2011
0

© 2021 SCE-ME. Social Change through Education in the Middle East is a Not for Profit organisation registered in England and Wales. Registration number: 7504666